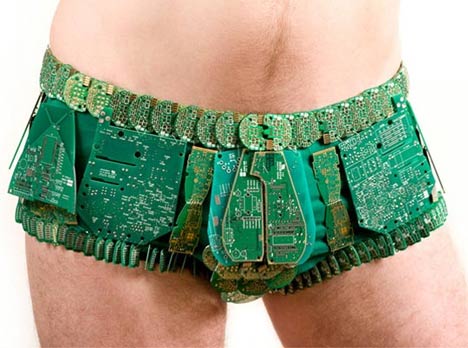 Population Control 2.0 was originally created as part of a collaborative project by the Metal Arts Critique Collective to bring public awareness to the issue of e-waste and the benefits of recycling. Each member of the group was given access to small, pre-cut circuit board rejects to make a piece of “green” jewelry. The works were showcased in the exhibition Jewelry_cycle at the San Francisco Museum of Craft + Design in fall 2008.

While the circuit board pieces used for Jewelry_cycle were mostly from cellular technology, I tend to associate circuit boards with computers and guys and all that is geekery, this being the impetus for my Population Control 2.0 boxer briefs. Having a boyfriend who uses laptops for endless hours daily led me to revisit medical studies on continual laptop use linked to male infertility. Could it be a male form of birth control? My process in making the briefs became a public crafting event in which I brought all my tools, parts, and male dress form “Julian” to a 3-day chill music festival/campout and constructed the piece right out on the lawns. Working on “Julian” became the perfect icebreaker to engage the public in a dialogue about recycling, circuit boards, and art.

It gives one pause to think how technology will affect our generation’s health 10-20 years from now. Not only is the production and conspicuous consumption of computers toxic to our environment, it may possible hinder our ability to repopulate future generations.” 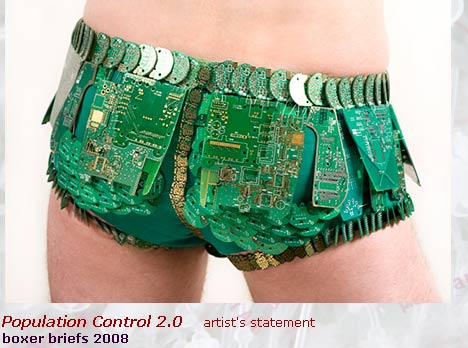